While my beloved wife and kids are still on holidays, I returned yesterday to resume work. Actually, holidays should really be put into quotation marks, for an appropriate representation of the last week. “Holidays”. There, much better.

The reason for these quotation marks being, that our children woke up every morning around 5 am (the hobbit woke up that early and with our rooms being close together and not soundproof, the little one woke up around the same time, which resulted in both of them being grumpy for a large part of the day. It got slightly better until the end of the last week, but generally it was rather exhausting, unfortunately (we even had to cancel a visit to the Leipzig zoo, because our daughter was almost constantly grumpy, which was really a pitty because it is a really lovely zoo… She was almost only satisfied when she was allowed to pet koi carps and when she was eating french fries. If you were in the Leipzig Zoo last wednesday by any chance, there is a very good chance that you heard us – maybe it even sufficed if you were somewhere in Leipzig (at least it felt that way).

Anyway. it is really a pitty that the “holidays” were not as relaxing as we had hoped for them to be, because without grumpy children, the place we went comes as close to a perfect hideout as one can imagine – which is why I wanted to introduce the place here. Since I left the camera with my beloved wife, the pictures used for illustration purposes are from previous visits. I am sure, an update will follow as soon as the best wife is back.

The place itself is an old farmhouse, which the father of the best wife bought around the turn of the millenia and gave it his wife for present – causing her to cry for 5 days straight after she saw it, because it was so incredibly run down and two old ladies lived there who had been granted a residence permit for life – these ladies were not only constantly grumpy, but also were basically using the entire land as a outdoor toilet and even the house inside was quite stained where their pisspot was standing (they did not have a toilet back then). They did not approve of any changes to their situation, so very little was done while they were alive. Yet as they passed away, the entire family was working together to make this place a nice getaway for the entire family (it is in close proximity to the actual home of the best wife’s parents). So by now, there is not only sanitation installed, but two lovely fireplaces and just this year, central heating was installed (well, on the groundfloor, the first floor can still be pretty cold at night).

Even better than the house itself is, however, the land surrounding it. Besides the trees, that allow harvest of pears, apples, plums, mirabelles, elder, cherries, there is a herbal garden and an farmhouse style garden, the latter of which is constantly buzzing with life. I have seen at least 10 different butterfly species (without being an ornithologist – others can probably differentiate much more 🙂 ), 5 bumblebee species, and just so much more. Actually, this was also the first large insect hotel I had built wit different habitats -previously I had only built bumble bee boxes. A picture of it can be seen below. The father of the best wife also always makes sure to leave piles of sand stone and rock lying around everywhere, so that since last year a grass snake is one of the permanent residents and so is a European toad since this year (he is really great when it comes to nesting sites: there are also nests for swallows installed, as well as a tiny box which is occupied by a starling each year and just this year, lots of homes for earwigs have been built by the kids). Also lizards of course really love these rock piles. So one can really just roam around the house for hours and observe all the wildlife – particularly as there is no distraction from the internet, so most leisure activities involve books, games or wildlife observations. After having read a buzz in the meadow,  which we gave away in our book raffle two years ago, we are now also planning to sow rattleweed on at least parts of the meadow to slowly transform it into a rough pasture, thereby providing even more food for the insects and hopefully, attracting many new species. So to give you a slight overview of the place, of course, some pictures are attached – as I mentioned, a lot has been done this year and presumably the best wife will post some updates in due time when the internet has its tight grip around us again

The tractor to drive kids around 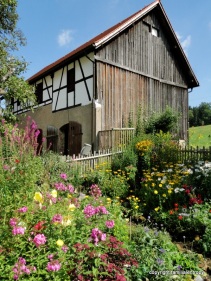 The barn and the garden 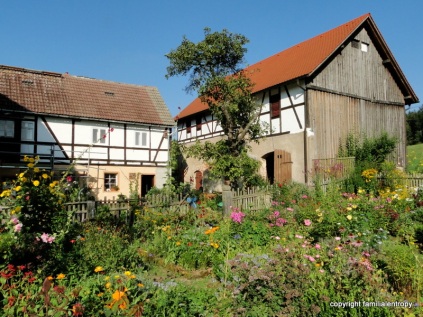 Starling in front of his house

Familial entropy - that's an insight into our current life which has been fundamentally changed last summer when our daughter was born. Having studied in Cottbus, Germany, and worked/studied in Edinburgh, Scotland, we momentarily live in a small town in Switzerland where Karsten is trying to save the environment and Freddie is trying to save our sanity. Since there is not much time for elaborate, long emails while doing that, we thought a blog might be a good option to smuggle ourselves into the lifes of our friends.
View all posts by erdhummel →
This entry was posted in Allgemein, Family, Garden, Travel and tagged family, farm houses, garden, holiday, insects, summer. Bookmark the permalink.