I can’t remember exactly how old I was, but I must have been 14 or 15 when I was building my first nest site for insects (back then it was a nesting box for bumblebees to be precise) and the memory is particularly engraved into my brain because my sister came down asking why I am making so much noise and when I told her, she ran upstairs infuriated, shouting why among all of her friends she must be the only one that is cursed with such a freak as a brother. Lots has changed since them – both in the relationship between me and my sister and for bug hotels as well, which nowadays are very common and almost fashionable.

Five years ago I built my first bigger bug hotel and while I barely had time to built any since (with work etc consuming most of my time) I still have learnt a thing or two, so that when I started the newest project for our garden I had a better idea of how to approach some things. So I thought I share the progress in this project with you. Before raising the expecations too high though, let me emphasize that I am neither talented in woodwork, nor are all the things I will write here be huge revelations that noone ever thought of. The pictures are not great either, because they were more for documenting purposes than for artwork. Also I should note that I am not an entomologist or even a biologist. I am just an enthusiast, but dont take my word for granted because of that.

Nevertheless, despite the bughotel not being finished yet, the success is already showing and several sections are already buzzing with life. Only while taking the few pictures in the last minutes I saw three different bee species coming and going and climbing inside the bamboo… And in the end that was all I was going for (one of the advice one always encounters is: A good bug hotel is not beautiful to us but to the bees (and other insects).

So this is what I did:

The bug hotel is made out of unplaned construction wood. This has three main advantages: a) there are no toxical industrial glues etc that are volatile and can affect the insects, such as OSB-  or glued wood contains. b) it is incredibly durable and easy to work with. To increase durability I treated the weather exposed bits with linseed oil. This can be bought very cheap as a feed additive for horses and this also ensures that no artificial additives are contained such as in boiled linseed oil.This brings me to c)  unplaned construction wood is really cheap. This bug hotel has the dimensions of 120 x 100 cm and the entire constriction wood was around 13 EUR.

I came up with 6 main segments. The general frame is just made by cutting each corner into a 45° angle to create a more stable miter joint. Then I cut out some notches at the bottom and top, as well as the sides. This is to stabilize the wooden panels in the center. They themselves are linked at the crossways by cutting out half of each wood to create a splice joint. The piece of wood in the center is oak, which was stripped of its bark. The entire thing is manteled with tarboard. Admittedly not an organic product but it doesn’t produce toxic fumes or leachates and increases the life time quite a bit. The backwall of the insect hotel is useful because it helps to reduce wind flowing through the bug hotel thus enabling particularly higher temperatures in spring. For this I used untreated floorboard because they have grooves and tongues, thus they provide a perfect fit. But again it should be untreated.

The bamboo sticks were another thing I bought because they always are one of the most used elements. But To make it cheaper I always cut them in comparably uniform sizes independent of the internodes. But because the wild bees dont bite their way through the internodes I helped with the drill, to ensure that when an internode wasnt at the end of the bamboo, but in the middle, I got rid of it. This is important because bees prefer bamboo sticks that have a depth of at least 10 cm.

Even when there is no internode in the way it sometimes makes sense to “clean out” the ends with a drill, to enable the bees to enter 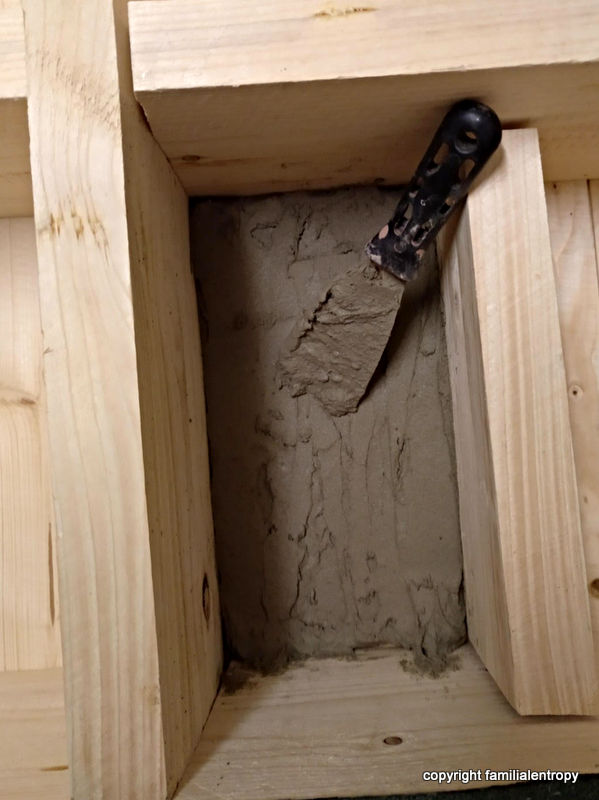 Removing the internodes creates a problem: Bees will only nest in bamboo that has an end. So I used tile adhesive that I spread at the bottom of the segment. This seals the open bamboo tubes at the end, thus enabling nesting in it. It also provides a second benefit simultaneously. In my first insect hotels birds were quick to discover the new buffet, pulling out the bamboo to feed on the larvae inside. This is not possible anymore with the tile adhesive either. 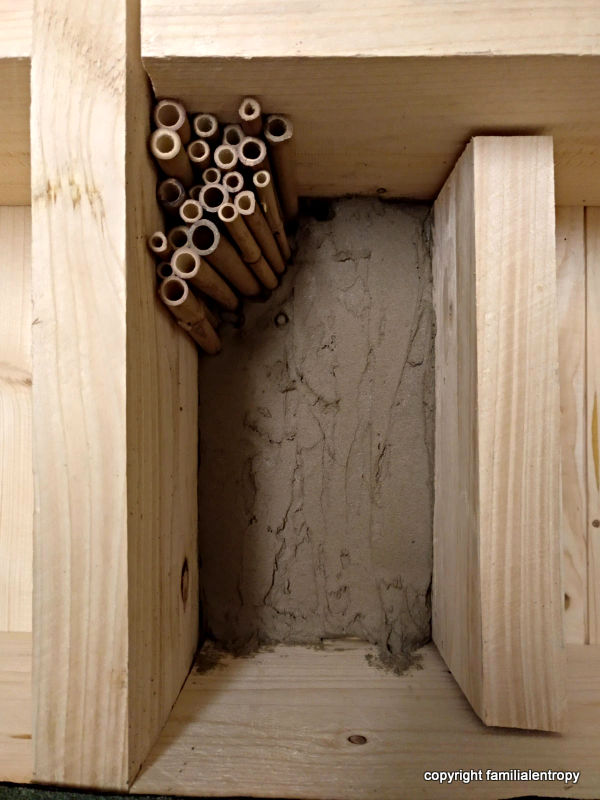 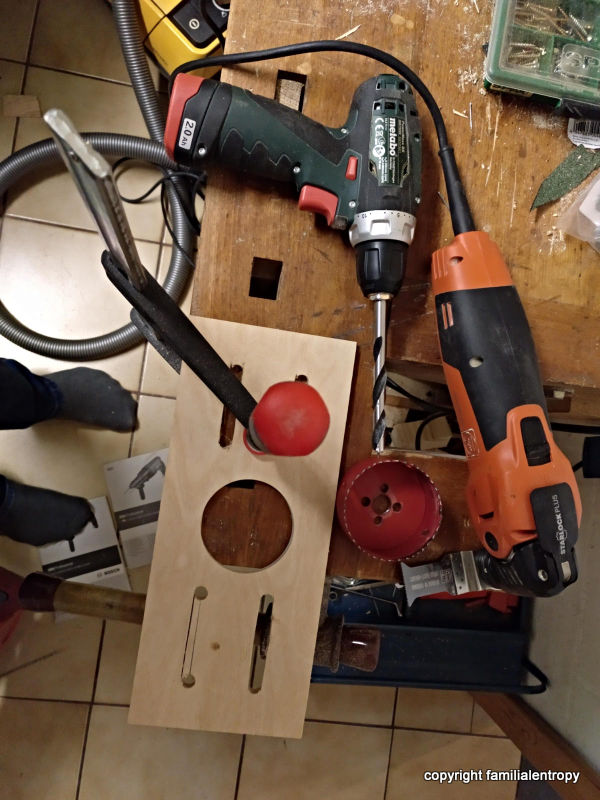 This is the door for a butterfly home. I never built any of those before, so I am quite curious to see how it goes. The hole in the middle is basically just for observation purposes and was covered with translucent plastic glass, as can be seen later. The slits were combined with a wood nail (see later as well) to provide a landing platform and then the butterfly can enter through the slits.

One of the main ingridients of almost every insect hotel is a clay wall, where the insects can also get clay etc to seal there holes or to nest inside as well. I was lucky that there was a construction site closeby that was very rich in clay. So after the construction workers had left we took three shovels and buckets and I went with the kids to go get us some clay.

View of the clay-rich construction site. Construction was still predominantly further away, so noone bothered with us running around there.

Because the final bug hotel weighs at least 60 kg (including filling) and I dont want it to fall on the kids, I used earth anchors that go 90 cm into the ground, This was necessary because our soil is very sandy and this is the easiest way to get a strong base without using concrete. 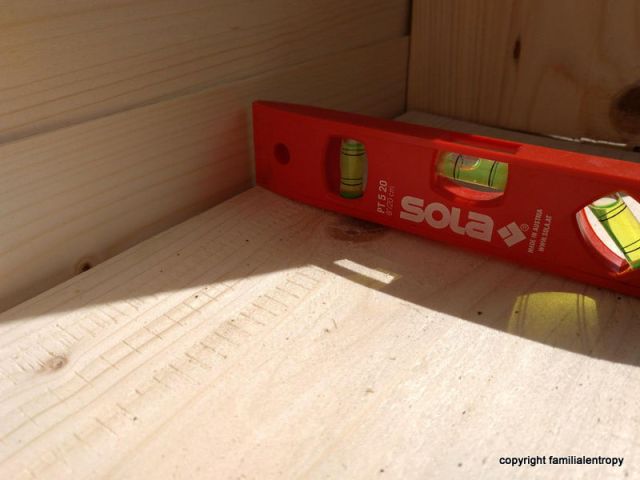 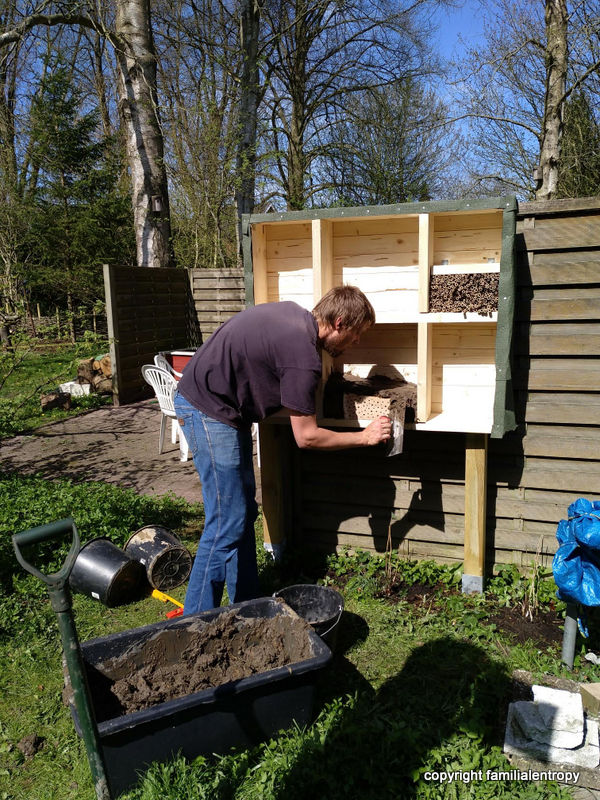 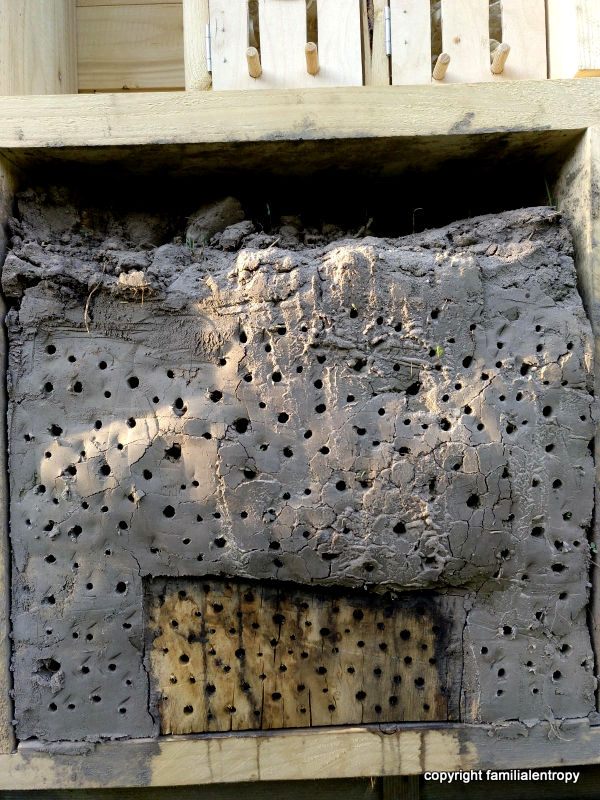 Unfortunately the clay got wet quite often from rain after I filled it into the bug hotel, so everything initially got a bit soggy. Now it is rock hard, but it of course doesnt look that great. Really important here is the oak. As you saw earlier I had removed the bark. This is because unlike most people do one should not drill the holes into the end grain part of the wood (where you see the rings). Holes should always be drilled orthogonal to the wood fiber rather than parallel to the fiber. This is to a) prevent closing of the holes when the wood fiber should swell up due to wetting etc, and b) if the hole is not perfectly cut, this enables the insects to chew off little pieces that protrude into their hole. 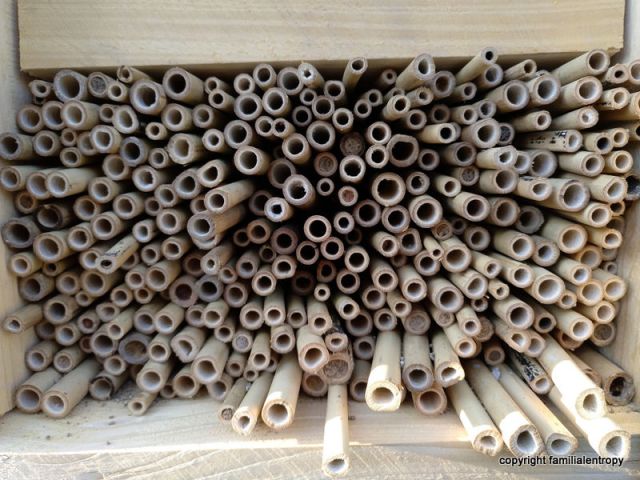 This is as far as I got now. As you can stee there is still lots of empty spaces and as I dont want to hammer etc anymore now, in order not to annoy the already developing grubs etc this has now become a long-term project to be continued across the years… Further things I want to include are accomodations for ladybirds, earwigs, green lacewings and include different species of wood to drill holes in, to see which one is liked best. 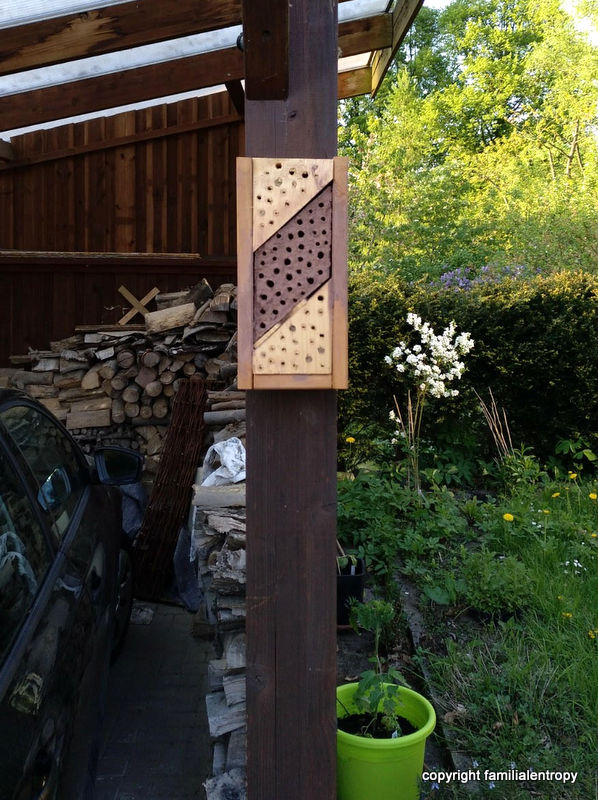 Diversification is the key. To prevent spreading of disease etc, many bug hotels are always advantageous. So i made this small one from leftovers and installed it at our carport.

Basically that is it. The orientation of the bug hotel should ideally be south facing yet not directly into the prevailing rain direction, so adjustments can be made. As sunny as possible is great and a proximity to the home is also advantageous as it provides more safety from predators. But of course, bug hotels generally only make sense when also a diversity in flowers exists that provide nectar and pollen throughout the year and are accessible to the pollinators. So I hope that some of these things mentioned here were of some use and that maybe someone was inspired to build a bug hotel who has not previously thought about it. One of these absurdities of our time is that in many regions the polinator density is now higher in urban areas than in agricultural areas, so providing refuge and food for them is a great way to actively engage in nature conservation. Its also great fun for kids and I think few things are more relaxing than sitting in the garden and listening to the buzzing of the bees all around me.

Familial entropy - that's an insight into our current life which has been fundamentally changed last summer when our daughter was born. Having studied in Cottbus, Germany, and worked/studied in Edinburgh, Scotland, we momentarily live in a small town in Switzerland where Karsten is trying to save the environment and Freddie is trying to save our sanity. Since there is not much time for elaborate, long emails while doing that, we thought a blog might be a good option to smuggle ourselves into the lifes of our friends.
View all posts by erdhummel →
This entry was posted in Garden and tagged Bauanleitung für Insektenhotel, bug hotel, garden, Garten, how to build a bug hotel, Insektenhotel, Summ summ summ. Bookmark the permalink.