It has been quiet on this blog (again). Basically because the last four or five (or six…) weeks have been quite exhausting….Our holiday in Scotland didn’t really bring the expected recovery and when we arrived home lots of work had piled up. Among others, I had to organize a summer festival for more than 100 (one hundred!) kids. And temperatures suddenly rose to over 30°Celsius for more than a week. In a normal condition I am already more a what you’d call a Northern type – around 25° Celsius is fine, but it doesn’t have to be warmer than that. But entering the last three months of pregnancy, I am absolutely convinced that a possible child number three will be born at the end of winter! Even those incredibly sexy surgical stockings do not really avoid swollen legs at the end of the day.

But one of the daily highlights and, in fact, a source of relaxation and contemplativeness, has been our garden. It’s probably also the only thing that truly enjoyed the high temperatures (and only because I am still draagging watering cans) and exploded into a summer garden.

On the day we returned from Scotland, we harvested our first strawberry. The little one did, to be exact. Since then, we have been living in a strawberry wonderland. Even with the small berry raiders, there has been plenty of berries left to harvest almost a kilo each day. I have been busy cooking strawberry jam (or strawberry elderflower jam….or strawberry rhubarb jam…) and so far, we are up to 14 glasses and I am confident that there will be plenty of berries which can be frozen so we can enjoy some of them during the winter.

The stem turnips, the beetroot, the pumpkin, the salad, the potatos and the corn are doing well. We also harvested our first garlic today (earlier than expected but who am I to complain??). Only the courgettes are a bit weak so far.

A new thing in this years garden is the French spinach which has passed the test as salad contribution and will be planted next year again. Another new thing are the mangetouts which we love but somehow our plants don’t seem to feel too well. Which is a bit frustrating because we have supplied our friends with seeds as well and we planted them on the same day and theirs are full, truly full of peas. We’ll work on it… 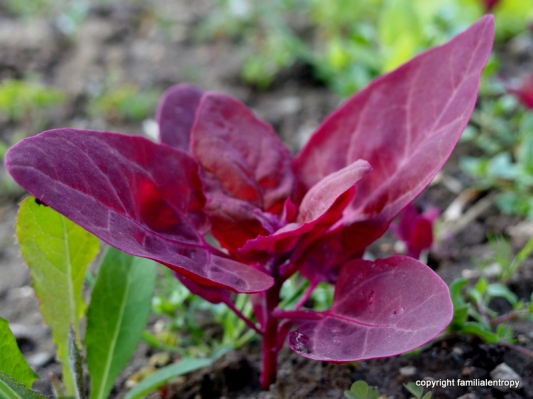 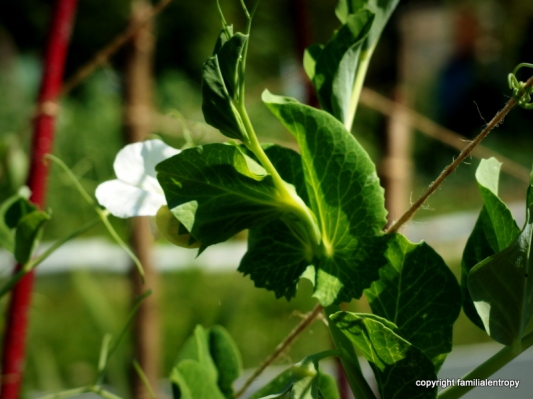 Thanks to Karsten’s enthusiasm for bumblebees and the fact that bumblebees need at least 6000 flowers each day, I could plant more flowers than usual this year. A real joy has been the California poppy which has disseminated itself last year. The lady’s mantel and the love-in-a-mist are blooming, and so is the phacelia. Hopefully there are plenty more flowers to come!! In the meantime, we’ll fight the weed…and I hope I’ll be able to work in the garden for some more weeks!

Familial entropy - that's an insight into our current life which has been fundamentally changed last summer when our daughter was born. Having studied in Cottbus, Germany, and worked/studied in Edinburgh, Scotland, we momentarily live in a small town in Switzerland where Karsten is trying to save the environment and Freddie is trying to save our sanity. Since there is not much time for elaborate, long emails while doing that, we thought a blog might be a good option to smuggle ourselves into the lifes of our friends.
View all posts by erdhummel →
This entry was posted in Garden and tagged flowers, garden, pregnancy, strawberries, summer, vegetables. Bookmark the permalink.