Last Sunday, Karsten took over the kitchen. He likes to cook, but does not often find the time to do so since most of the things he likes to cook require some preparation and time. Time is essential for Karsten’s cooking – cooking under time pressure can result into slight panic attacks, especially when he is cooking for guests and the guests are already ringing the doorbell. Also, the level of frustration tolerance varies quite a bit depending on the difficulty of the food. His attempt to make champagne truffles for his mother already reached a legendary status in our relationship. Normally, the kitchen looks like a battle field afterwards and since it goes without saying that I’ll do the dishes when he cooks, I often have ambivalent feelings towards his cooking.

On Sunday, he prepared Capuns. Capuns is a traditional dish from the Swiss region of Graubünden which consists of a dough made out of eggs, flour, onions, milk and spiced sausages wrapped in mangold leafs and cooked in a cream-boullion mixture. We had quite a bit of mangold in our garden, so the dish was ideal for the weekend. 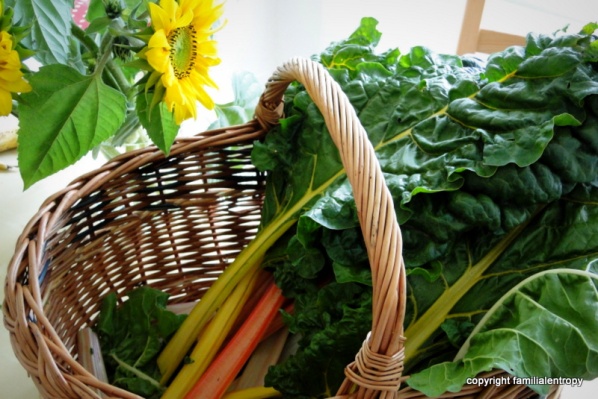 Karsten started to prepare the food at around 4pm with picking the mangold. Then he disappeared into the kitchen while the little one and I had a nice afternoon outside on the playground. At 6:30 we went home again, it smelled fantastic and only took some more minutes until the food was ready. Delicious! Absolutely delicious! I have to admit: most of Karsten’s dishes are delicious! The little one had two capuns without onions which she ate completely. As comparison: Karsten and I had four capuns each after which we were completely stuffed. Mangold seems to be one of her favourites…So, definitely a recipe which will make it into our recipe folder and which will hopefully take less time to prepare once we are familiar with the proceeding!

By the way, one of the reasons why it took Karsten so long to prepare the food was that he individually blanched each mangold leaf for a minute (we had around 20 capuns), and then washed it with cold water and dried it. That’s true devotion! And I will spare you the image of the kitchen after dinner…

Familial entropy - that's an insight into our current life which has been fundamentally changed last summer when our daughter was born. Having studied in Cottbus, Germany, and worked/studied in Edinburgh, Scotland, we momentarily live in a small town in Switzerland where Karsten is trying to save the environment and Freddie is trying to save our sanity. Since there is not much time for elaborate, long emails while doing that, we thought a blog might be a good option to smuggle ourselves into the lifes of our friends.
View all posts by erdhummel →
This entry was posted in culinary bits and pieces, Switzerland and tagged Capuns, food, Graubünden. Bookmark the permalink.