the lost art of writing letters

9am this morning. The little one and I go downstairs to inspect the letterbox. And HORRAY – after days and days of advertisements and bills, there’s a postcard in our letterbox! Someone went somewhere, thought of us and wrote us some lines! Sounds simple, but I have been noticing that it is becoming quite a forgotten art.

When I was young (cough cough…), there were no Emails, no Facebook and even the mobile phones just started. It sounds unbelievable and makes me feel incredibly old (though I am not, trust me!), but that’s how it was. Karsten, who is 2 years younger than I am, is still making fun of me because I saved my first essays for university on a floppy disc. So, what did I do to stay in touch with my friends? I wrote letters. And postcards. And letters again. When I was 13, we moved to another city and I left some very good friends behind. There were weeks where I would receive a three or four pages long letter after school, sit down in the afternoon, write a return letter (3-4 pages as well), and with a little bit of luck my friend would receive it the very next day. I saved all the important letters I received. During our holidays, I wrote lists of all the people whom I would like to write a postcard. And every single time when I came home, I checked the letterbox. Which I still do today, but most of the times there are just boring, white, official envelopes in there. Every now and then, though, there’s one with handwriting, maybe even in color, which always makes the day!

I still love writing letters and I think it is turning into a lost art. Not because it is expensive in terms of money. But it means you have to take some time in today’s busy and hectic world. Because if you want to write a letter, it is not just about some quick lines. It is about taking a break from your normal schedule, about sitting down, choosing a nice paper, concentrating and writing. For me, it has a much more personal connotation than emails or sms. A letter shows that you think of someone, not just for a minute, but for maybe half an hour or longer. It is about appreciation.

One of the most important memories I have when it comes to letters is my old primary school teacher. She was a great teacher and I really loved her. After I left primary school, I would still write her postcards. And she wrote me back. Postcards turned into letters. And she wrote me back. After some years, she offered me the “du”, via letter (for all the english-speaking friends: “du” is the informal form of address that you only use for friends and family or people who are the same age). We still wrote each other letters during my studies. And after my studies. I told her about what was going on in my life. About my travels. She wrote me about her travels, her grandchildren and later about her recovery after she had cancer. We didn’t write every month. But at least three or four times a year. Three years ago, her husband suddenly wrote me an email to inform me that she was brought to a hospice because she was dying. That was after we hadn’t written each other for some months, so it caught me off-guard. I sent a big bunch of flowers and a letter in which I thanked her for all her letters and our special relationship. I don’t know if she got it – she was already in coma when it arrived. When she died, I was grieving for a very good friend. I hadn’t seen my teacher since I left primary school. But we had been writing letters to each other for more than 20 years. The next christmas, I automatically put her on my list for christmas cards, realising only later that  I couldn’t send it anymore. And even today it still feels weird sometimes that I can’t write her anymore.

So, if you read this, try to remember when you have written your last letter. And perhaps you’ll sit down this weekend, for half an hour, with a nice cup of tea or coffee next to you, and you’ll write a letter to a person that’s dear to you. It will most definitely make the day! 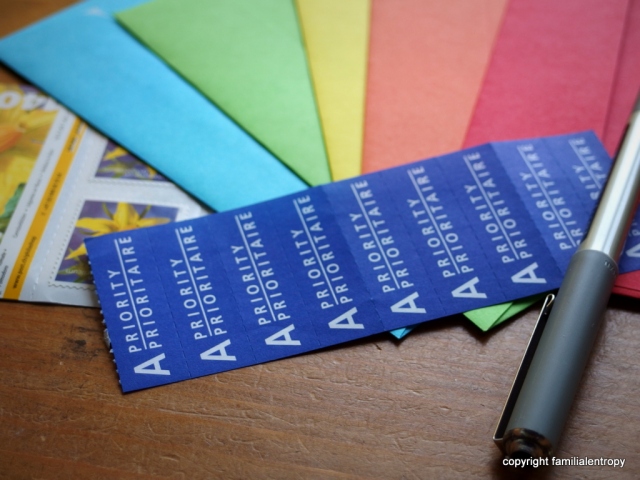 Familial entropy - that's an insight into our current life which has been fundamentally changed last summer when our daughter was born. Having studied in Cottbus, Germany, and worked/studied in Edinburgh, Scotland, we momentarily live in a small town in Switzerland where Karsten is trying to save the environment and Freddie is trying to save our sanity. Since there is not much time for elaborate, long emails while doing that, we thought a blog might be a good option to smuggle ourselves into the lifes of our friends.
View all posts by erdhummel →
This entry was posted in Miscellaneous and tagged letters. Bookmark the permalink.

6 Responses to the lost art of writing letters