During the last weeks, I haven’t had much time to write. Great events cast their shadows ahead and lot’s of stuff has to be done. Plus, the little one is demanding more and more entertainment and is getting quite annoyed if dinner isn’t ready as soon as she feels hungry. Therefore just a few bits and pieces from our last week:

After a difficult start of the week (maybe all the travelling finally took its toll), the little one finally figured how to use the baby walker after she spent a whole afternoon pushing our storage boxes around the flat. Our days are now dominated by the sounds “rattlerattlerattlerattle BANG rattlerattlerattle BANG…” At least she learned really fast how to manoeuvre the walker and she is proud as Punch. I also think that there is a new tooth coming. But then again, I have been thinking that for the last three months and nothing happened so far.

She also takes great pleasure in making nonsense now. Preferably at the dinner table. Her highlights of our meals: when she can finally put the empty plate on her head. Note: I didn’t manage to stop her from doing it. But at least now she waits until the plate is empty!

While I was at my parents place, Karsten had a workshop in Turku again. He really enjoyed the long days and all the stuff that goes with being on workshops (nice dinners, afternoon in a high rope park, sitting at the river drinking gin tonic until 4am, enjoying the hotel spa and sauna and last but not least the good company of our friends…). While I was on a 12 hour journey with the little one, he told me on the phone how great it was to sit in the whirlpool and relax….afterwards, he had such a bad conscience that he booked me a spa treatment in Zurich.

And that’s what I was doing on Friday: Karsten took care of the little one and I went to the city centre for an “Irish-Roman Spa ritual”. Meaning lots of warm water basins, steam saunas, whirlpools, relaxing chairs, sea buckthorn peelings and so on. It was such a great feeling to have the whole afternoon off and to relax without being under time pressure. Highlight of the thermae in Zurich is, by the way, the roof pool from where you have an awesome view over the city while relaxing in a jacuzzi. Only thing I struggled with: lying relaxed in the water when in fact, your legs are always trying to reach the surface or drifting away. The others didn’t seem to have that problem…maybe I am just out of training. Or it was a small and clear sign from my body to loose weight? Who knows…

Apart from all these pleasures we also worked quite a bit in the garden. We had salad for dinner for the last few days – it really pays off and tastes so much more delicious than the normal salad from the supermarket. The first strawberries are ready (much to the delight of the little one). I made peppermint-lemon balm syrup. And planted bush beans, red beet and fennel…but they are not really growing a lot at the moment. I also sowed more flowers, let’s see how that turns out. Every evening at dawn, slugs are invading our garden, celebrating an orgy. During the day, they are joined by their friends, the greenflies.

What else? Right now, Karsten is out there in the darkness (nautic twilight, just so you know!) gazing at stars. While I have been writing these lines, he called me three times. First I saw the moon – just a thin crescent, but I think I saw the Sea of Fertility (hehe…). Half an hour ago, I saw Jupiter with five moons. And now I will, before going to bed, quickly run outside to check out Saturn.

So, good night everyone. May the nautic twilight be with you. 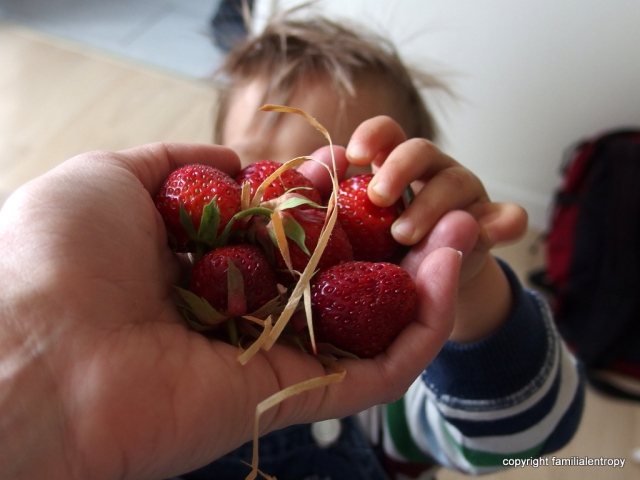 Familial entropy - that's an insight into our current life which has been fundamentally changed last summer when our daughter was born. Having studied in Cottbus, Germany, and worked/studied in Edinburgh, Scotland, we momentarily live in a small town in Switzerland where Karsten is trying to save the environment and Freddie is trying to save our sanity. Since there is not much time for elaborate, long emails while doing that, we thought a blog might be a good option to smuggle ourselves into the lifes of our friends.
View all posts by erdhummel →
This entry was posted in Family, Garden, Switzerland, the little one. Bookmark the permalink.

2 Responses to bits and pieces