Although the weather has finally cooled down a bit which almost feels like being reborn again (haha, I am starting birth metaphors), I don’t seem to find the time to write proper blog posts. There are many things to write about, but somehow I feel like I am out of steam. Also, I suspect that someone has exchanged my cute, little daughter with Rumpelstiltskin – at least that’s how my mornings feel like. Yesterday, it took us more than an hour to leave the house in order to do some shopping…an hour full of hue and cry and I am sure she doesn’t even know what she is crying about (most of the times I don’t have a clue either). During her lunch nap I normally nap as well and in the evening I can’t really pull myself together either….and if I do, there is plenty of stuff to prepare. Hence no time for many blog posts…

But here’s some news:

After months and months of construction work, we finally reached one of the milestones: the new playground is ready and open for children. (Well, grass and flowers still need to be newly planted and the sandbox doesn’t contain sand but gravel instead but hey – the children started to play “gravel quarry” so it’s fine for them!). 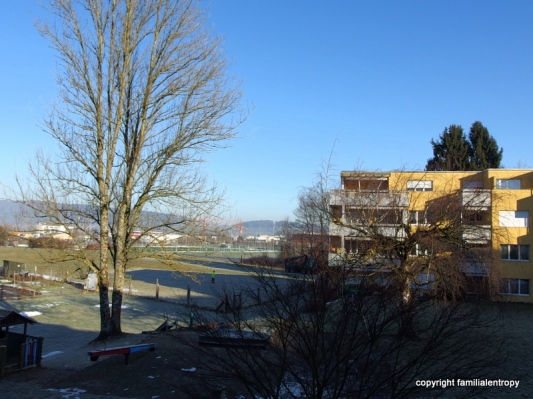 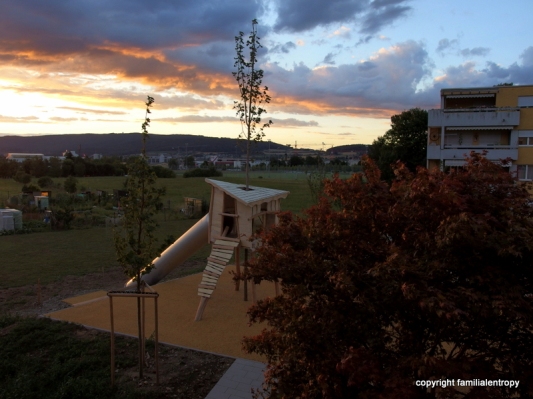 And after months and months of discussions and numerous complaints from all sides, everyone seems surprisingly happy with the new playground. And why shouldn’t we! It’s the best playground in the whole village and it’s right in front of our door. Even the fear that there wouldn’t be enough options for the very little ones didn’t become true: the climbing frames are perfectly fine for little children, the sandbox has finally been ground off so that we hopefully don’t risk any deep-down-to-the-bone-lacerations and despite the worries that the tree house with the including slide might be too dangerous and steep it took the little one only one week to climb and slide all by herself (with me watching anxiously from the ground). The only real disadvantages is the lack of shadow which was, however, foreseeable. What do you expect if you replace big trees with small ones (sigh….). But thanks to the cooler temperatures we are no longer restricted to play times before 10am and after 6pm but can climb and swing and slide all day long. 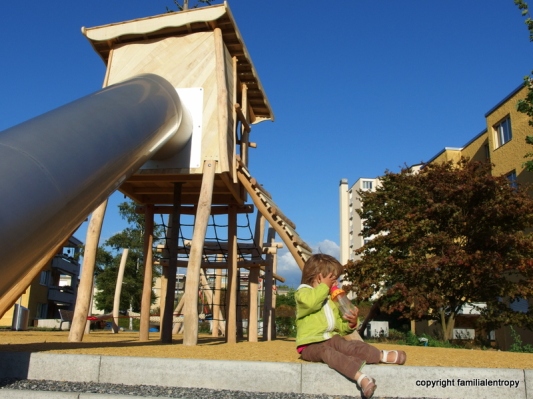 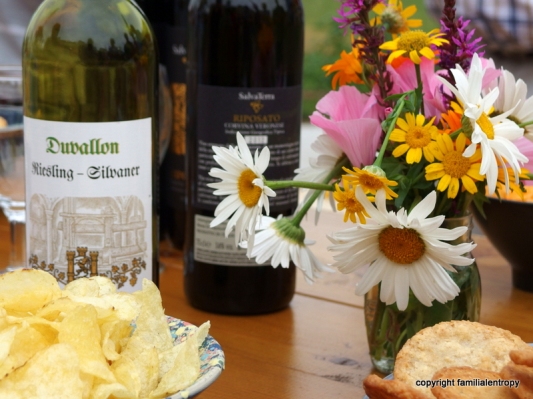 Familial entropy - that's an insight into our current life which has been fundamentally changed last summer when our daughter was born. Having studied in Cottbus, Germany, and worked/studied in Edinburgh, Scotland, we momentarily live in a small town in Switzerland where Karsten is trying to save the environment and Freddie is trying to save our sanity. Since there is not much time for elaborate, long emails while doing that, we thought a blog might be a good option to smuggle ourselves into the lifes of our friends.
View all posts by erdhummel →
This entry was posted in Switzerland, the little one and tagged playground, pregnancy, terrible two. Bookmark the permalink.