Hello there, we are back again!! After one week full of Scottishness, we returned home safe and sound and a bit knackered. It has been a holiday full of memories, old and new ones, full of beautiful landscapes, sheep. good food and good company, but also full of unnecessary excitement and tantrums due to a lack of sleep and growing independence on the part of a certain cute little (and loud) button. There are definitely some consequences which need to be drawn for the next holiday (not that we know anything about a next holiday yet), but hey, that’s how parents gain experience, isn’t it?

We started last week in Edinburgh – after half a day of travel we were suddenly overwhelmed by so many good memories, and, to make it even better, by unexpected sunshine (at least during the first afternoon)! What a welcome! Already at the airport I felt a foolish grin on my face which just wouldn’t disappear and which was caused by the greatest of all English accents…I simply love it! When we first arrived in Edinburgh five years ago, we didn’t understand a word. Which was challenging as we had to go flathunting and there is no list of bus stops in the busses – apparently you are expected to know your way around, no matter where you are from. So when we asked the bus driver about our destination, he was so kind to talk to us for about three minutes….and we had no idea what he was talking about. Well, this time, we had no difficulties at all. Although the busses still don’t list the bus stops.

There were so many small things that felt familiar and that had almost slipped our minds. The smell of the brewery. The wind (how could I forget about the wind)? The queuing at the bus stops. The smell in the bus. The Scottish love for porridge, baked potatoes and scones. The immense amount of ready-made meals in the supermarkets. All the health-and-safety signs everywhere. The Scottish weather (sweater? no sweater? your rain jacket? just a t-shirt? or a hat after all? all within ten minutes…). The unexpected view of the North Sea wherever you go. Edinburgh is one of the most beautiful cities I have ever been to. Although being there with a toddler was completely different from living there on our own. We didn’t go to any pubs, nor did we go for excessive city strolls. But we checked out the playground in the Princess Street Gardens for the first time. And visited Gorgy farm, a small farm with domestic animals in the middle of Edinburgh, which is a great spot for small children.

Unfortunately, our stay in Edinburgh was way too short to go to all the places we wanted to see again or even to meet up with all the dear people we hadn’t seen for years. But we managed to go for a walk in the city, to visit the Botanic Garden (and a certain bench), to have a coffee at our favorite café (Leo’s Beanery, for those of you who are looking for a good place to regain strength after a walk in the New Town) and to drop some Swiss chocolate at my old work place. We also managed to find out what happens when you press the alarm button in the elevator…well, to be correct, the little one found it out for us. Guess what, the alarm starts to ring. And your child starts to scream. But she was probably more scared by the petrified reaction of her father than by the alarm itself.

After one and a half day in the capital, we tried to make our way over to the Isle of Mull….and managed to check out the Scottish emergency units. But that’ll be the next blog post, I think. 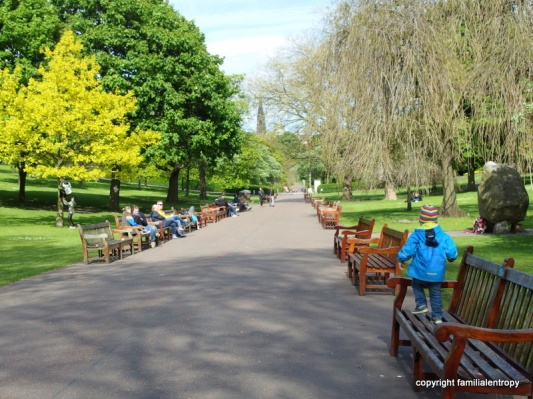 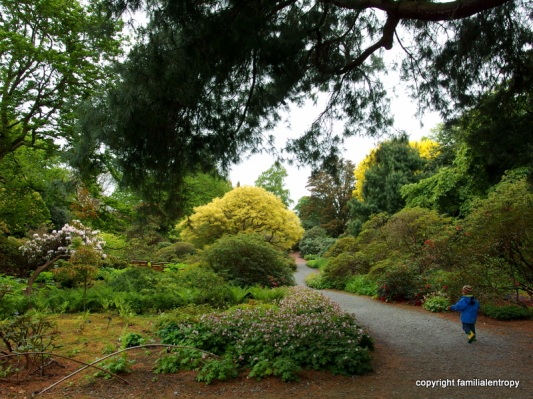 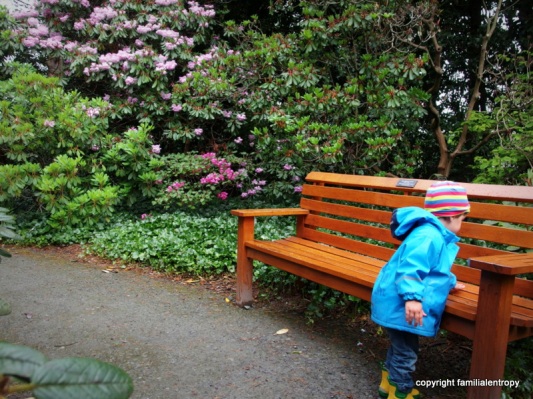 Four years later…back again, married (as promised on this exact spot) and with the little one (and one more)

One of the nicest cafés in Edinburgh New Town: Leo’s Beanery

Familial entropy - that's an insight into our current life which has been fundamentally changed last summer when our daughter was born. Having studied in Cottbus, Germany, and worked/studied in Edinburgh, Scotland, we momentarily live in a small town in Switzerland where Karsten is trying to save the environment and Freddie is trying to save our sanity. Since there is not much time for elaborate, long emails while doing that, we thought a blog might be a good option to smuggle ourselves into the lifes of our friends.
View all posts by erdhummel →
This entry was posted in Family, Scotland, the little one, Travel and tagged Edinburgh, holiday with children, Leo's Beanery, memories, Scotland, travel. Bookmark the permalink.