While I was in Berlin, I wanted to take the chance and visit a museum all by myself again. Although I love visiting museums with children (after all I focused on museum interpretation during my studies), I do appreciate opportunities to concentrate and learn something new just for myself.

I have been to most of the major museums in Berlin, but what I hadn’t managed to see so far was the Hohenschönhausen Memorial. And since I was already staying next to the Berlin Wall (and about to finish “Child of the revolution” by Wolfgang Leonhard), I thought it might be a good occasion to focus on Berlin’s GDR history.

Hohenschönhausen was built as a soup kitchen during the Nazi regime, but turned into a prison as soon as the war ended. After being managed by the Soviets in the post-war period, it was handed over to the GDR at the beginning of the 60ies and acted as the headquarter of the remand centres in the country (run by the Ministry of State Security). The brutal physical interrogations were replaced by a more subtle (but in the end no less brutal) psychological terror. While physical violence was surely not completely abandoned in GDR prisons, the remand centres of the Ministry of State Security are primarily known for their psychological tricks to make you confess things you are not guilty of. One of the main strategies to get a confession was to leave you in the dark about what you have done, where you are and how long you will stay there. Another strategy was, as weird as it sounds, complete boredom. If you don’t know where you are and what you have done and if you are then left in a cell with just a bed and a bucket and you don’t see or talk to anybody for three or four weeks you get desperate not to end up in the cell again for another undefined amount of time.

And we are not talking about murderers, rapists or other criminals here. The remand centre was for people acting suspiciously – as the Minister of State Security said: “Enemy is the one thinking differently”. By the way, when was the last time you criticized your government or your employer?

You can only visit Hohenschönhausen as part of a guided tour, and the tour guides are all former inmates of the prison. My guide had an incredibly good way to explain the word-twisting and the knock-out arguments of the State Security which left the inmates with almost no chance to be discharged (the lawyers were not a big help either as they needed a permission to practice their job and guess what…this permission was only granted by the ministry). He also explained very well how the State Security made you feel – starting from the uneasy feeling when you were suddenly pushed into a dark car and the angst you felt when, after 20 minutes adjusting to complete darkness, you arrived in a room fully lightened with neon lamps which felt like someone spread salt into your eyes. And the frustration and rage you felt when you hadn’t slept for several nights (because you weren’t able to remain in the mandated sleeping position and the guard reminded you of it every time you moved in your sleep) and when the three interrogators were then taking turns to ask you about the first name of your aunt (and your uncle…and your sister…and your own name…) over and over and over again. And how tempting it felt to agree to leave the prison with the only requirement to occasionally provide the State Security with some information about your neighbours…

And although he as a former inmate probably doesn’t have much sympathy left for the guards, he did not forget to raise attention to the fact that the interrogations were always done by three persons at the same time so that complete control was granted and no one gave in due to doubts or pity. 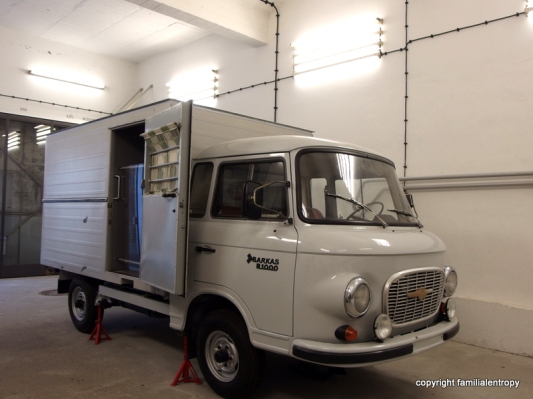 A blog entry does not provide enough space to describe the routine and the tactics at Hohenschönhausen appropriately and in detail, but the visit of the Memorial left me quite gloomy and pensively. It’s a very recommendable memorial and if you ever have the chance, you should go there and experience it for yourself. It was also the only museum so far where I experienced an actually excited discussion of the group (and the guide) afterwards. Sometimes it’s not too bad to visit a place that puts some things into a proper perspective again!

Familial entropy - that's an insight into our current life which has been fundamentally changed last summer when our daughter was born. Having studied in Cottbus, Germany, and worked/studied in Edinburgh, Scotland, we momentarily live in a small town in Switzerland where Karsten is trying to save the environment and Freddie is trying to save our sanity. Since there is not much time for elaborate, long emails while doing that, we thought a blog might be a good option to smuggle ourselves into the lifes of our friends.
View all posts by erdhummel →
This entry was posted in Germany, Serious thoughts, Travel and tagged Berlin, DDR, GDR, Hohenschönhausen Memorial, memorial, Stasi, State Security. Bookmark the permalink.