Ever since Karsten saw a book about Swiss Botanic Gardens at work, he had the desire to visit the islands of Brissago which are located in the Lago Maggiore, about 20 minutes by boat from Locarno. The bigger one, which is the only one which is open for public, was owned at the end of the 19th century by a baroness who established the botanic garden. Some years later, she was bankrupt and left by her husband which is why the island was sold. The following owner didn’t care much about the garden, but built a villa and a jetty so he could have some good parties over there. It must have been painful for the baroness as she moved to a village nearby from where she could see the islands every day. Well, at least the next owner didn’t do any harm to the garden (which was particularly highlighted on the information panel!) and when he died the islands were sold to the canton and the botanic garden was opened for everyone.

Well, we do have a soft spot for botanic gardens! So on Saturday, we decided to do a day trip, drove to Locarno, took the ferry and went to the island of Brissago. To be honest, I though the island looked rather small and I didn’t expect to spend more than an hour there.

It took us almost four hours before we took the boat back to Locarno! It is true, the island is rather small and swiftly tourist have probably seen everything within 45 minutes. But hey, the sun was shining. The Lago Maggiore was glittering. There were flowers, a small fortress, beautiful trees, weird-looking plants, a small beach, sunbeds and hundreds of lizards. The little one was busy collecting small stones (which, on a gravel walk, can take a while…). And letting the waves wash over her feet. And burying my legs with sand. 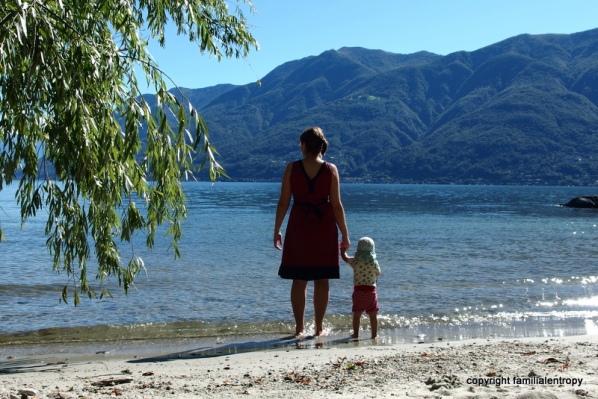 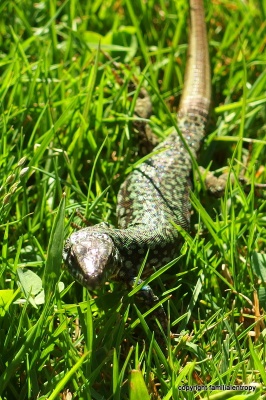 There was a villa with a restaurant where we had lunch (one of our holiday treats). And it was not crowded at all as the holiday season is over by now. There were so many beautiful spots on this small island and so many different botanic areas – amazing and definitely well worth the trip!

After lunch, when the little one fell asleep, we went back to Locarno and strolled around the city while eating ice-cream (seriously, I have no idea why there’s no ice-cream in Zurich!!). And the evening….well, dinner in the evening sun, red wine, view over the valley, and later on sitting by the open fire reading books.

Attention: the owner of this blog cannot be held responsible for any headless actions like packing in one’s job, spontaneous holiday bookings or the urgent feeling of wanderlust.

Familial entropy - that's an insight into our current life which has been fundamentally changed last summer when our daughter was born. Having studied in Cottbus, Germany, and worked/studied in Edinburgh, Scotland, we momentarily live in a small town in Switzerland where Karsten is trying to save the environment and Freddie is trying to save our sanity. Since there is not much time for elaborate, long emails while doing that, we thought a blog might be a good option to smuggle ourselves into the lifes of our friends.
View all posts by erdhummel →
This entry was posted in Family, Switzerland, Travel and tagged Botanic Garden, Botanischer Garten, Isole di Brissago, Lago Maggiore, Locarno, Tessin, Ticino. Bookmark the permalink.