thunder, family walks and conservation volunteers….or simply being outside

After the latest really culinary weekend I thought I’ll write about something more active and calorie-burning (I was about to write “healthy” but then I thought about it and was happy to find out that my mind is actually convinced of the healthiness of our food!). Not that you get a wrong impression… So what do we normally do if we don’t eat, sleep or tidy up?

Turns out we have, without never really forcing it, an outdoor child! Spending the whole day inside because it’s raining cats and dogs, just interrupted from occasional thunder and lightning? Hell! The little one gets cabin fever latest after her lunchtime nap. That’s the point of the day when she desperately hammers on the front door or the balcony door (depending on the day, this state can already be reached at 7am). Therefore, as of Sunday, we officially go outside even if there is rain and thunder! There is just so much more space outside, not to speak of all the things to discover and explore. 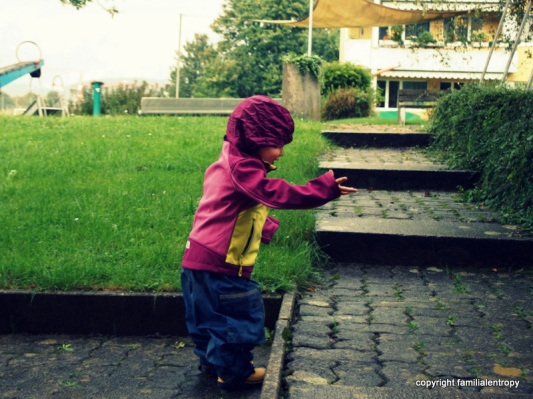 When I thought about my life and being outdoors, I recognized that I am actually not doing bad with being outside either. Most of the games I played as a child took place outside (which might have had to do with the fact that we didn’t have a TV). My friends and I strolled around, played theater outside, played tricks on harmless people walking by, climbed trees…Being a mother myself now, I am surprised and impressed by the confidence my mom had shown. Letting you child roam around outside all day without knowing what he or she is doing – that is something which sounds almost impossible in a suburban environment nowadays.

Apart from all the playing, there are two things that immediately come to my mind when I think of being outdoors:

1) Our Sunday walks as a family! Yes, my parents forced us to join them for a walk every Sunday. Sometimes nearby our house, sometimes a bit further away as part of a day trip. But on most Sundays, me, my siblings and my parents were walking or biking somewhere. While I am sure that I was a bit annoyed from time to time because I would have preferred to stay home and read, in retrospective I am highly grateful for these walks. Especially since my dad has his very own way to decide where to go to. He is interested in sailing and therefore in harbours – so as a child, I had to explore quite a few industrial harbours on Sundays. When the wall came down (I was about 6 years old) most of our Sundays were spent exploring the borderland which was very close to where we lived. Many of my childhood memories involve barren sand stripes, grey towers, fences and warning signs. My father went inside every single watchtower he could find. Not to speak of the day we were doing a bike trip and he had to go back with me because I was too exhausted and he decided to cross a field with a warning sign for landmines (nothing happened but my mother was shocked when I blabbered about it at dinnertime). Later on, he developed a crazy notion for old buildings (old in the sense of ruins). I was already fifteen or sixteen at that time, my siblings were out of house, but the Sunday walks continued. Whenever I see a ruinous building I see my father entering it, wondering how it used to look and what it could turned into to use it again. But there were normal walks too: along the shore of the Baltic Sea, in the Elbe Sandstone mountains, through forests and around lakes. Holidays were never spent lazily on the beach, instead we went hiking, canoeing or biking. And even if we spent numerous holidays at the Baltic Sea, we were always doing stuff.

When I moved out and started university, my outdoor life was restricted by writing papers, sitting in the library and being lazy. Only interrupted by some lazy walks around the town and occasional day trips with friends. Then Karsten and I moved to Scotland and it changed again. We explored, we hiked, we went for walks…and I joined the Conservation Volunteers:

2) The Conservation Volunteers = a bunch of hearty, sturdy, outdoorsy guys in Scotland who don’t mind getting dirty and who agree there is no better way to spend a weekend somewhere outside with some hands-on work. If you ask me, I joined them far too late and went on not nearly enough weekend trips (in my defence, I was not only working but also doing a distant study course at that time). Being a CV means that you get to go to places of incredible beauty in order to carry out conservation work, such as footpath repair, weeding, tree planting, digging water bars, doing rhodie bashing (yay) or collecting rubbish (yes, there are indeed people who climb up mountains to collect the rubbish tourists are leaving behind!). It’s where I learned to use a mattock. And were I learned to drink whisky. And where I learned to cook porridge. It’s where I learned how to handle conservation tools. How to carry them up the mountain in the morning and down again late afternoon. It’s also where I learned that the heaviest tools are often excelled by the thermos flasks and the biscuits that have to be carried up the mountain in order to have a proper afternoon tea! You don’t care about the weather – you just wear the right clothes. While I wasn’t wearing waterproofed trousers during my time at university (if it’s raining you simply don’t go outside…), they became a necessity in Scotland again. It is such a great way to volunteer, to meet new people and to see the country. To be outside even if you live in a city and don’t have a car. Not to mention the muscles your body is building up (and the sciatica pain that comes with the time). And it’s a shame that this concept of volunteering has not been established in Germany or Switzerland yet! 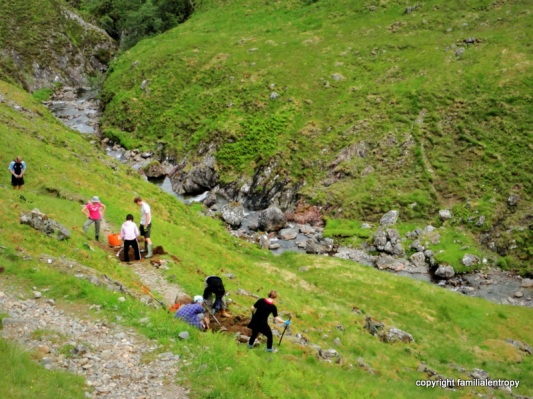 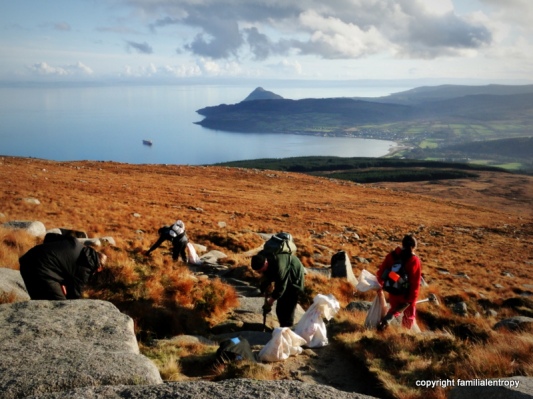 These are the two things that I basically adopted. We try to go for a walk as a family every weekend with the little one and so far she is enjoying it (phew). And well, it’s maybe a bit far-fetched to say that my gardening is conservation work. But it’s the first time since 10 years that I have a garden and I am appreciating the physical work (I can hear Karsten laughing…). At least I am not pulling out the wrong plants. That’s the little one’s job. After all the years at university I really enjoy being outside again. If there would be a CV group around here, I would join them instantly.

Hence: if you feel sleepy, if you don’t know what to do, if your brain isn’t working properly, if your child is mourning…GO OUTSIDE! Enjoy the seasons! Enjoy this beautiful autumn smell and the colorful leafs. And if you want to experience a shortened version of the CV’s: go join a Thistle Camp! And now excuse us….we have to put our shoes on!

Familial entropy - that's an insight into our current life which has been fundamentally changed last summer when our daughter was born. Having studied in Cottbus, Germany, and worked/studied in Edinburgh, Scotland, we momentarily live in a small town in Switzerland where Karsten is trying to save the environment and Freddie is trying to save our sanity. Since there is not much time for elaborate, long emails while doing that, we thought a blog might be a good option to smuggle ourselves into the lifes of our friends.
View all posts by erdhummel →
This entry was posted in Family, Miscellaneous, Scotland and tagged Conservation Volunteers, National Trust for Scotland, outdoors, Scotland, Thistle Camps, walk. Bookmark the permalink.

5 Responses to thunder, family walks and conservation volunteers….or simply being outside